Drilling which is fast and safe

Despite the increasing use of concrete walls, guardrails (or crash barriers) rank among the most fundamental road traffic safety structures. Germany’s motorway network, which is the fourth-largest in the world, amounts to around 17,000km. Under these circumstances, specialist companies are kept busy every day with building, expanding and maintaining the long steel elements with a length of up to 4 meters. Thinking about how the assembly of steel guardrails can become faster and easier, the production/assembly company Erwin Peetz GmbH & Co. KG decided to contact the precision tool company EXACT GmbH & Co, which is located in Remscheid, to bring up the issues he was facing.

A problem-free assembly of guardrails was enabled, using the new special step drill made by EXACT

In order to discuss issues related to the steel processing sector, a group of leading experts gathered in Remscheid for a meeting organized by EXACT, a well established producer of step drills. At the discussion table EXACT management and technical leads sat together, on the other side of the table ¬- Lutz Reichelt, the Erwin Peetz GmbH & Co. KG site manager points out key areas of concern. Building on more than 30 years of experience, he is greatly respected not just for being a professional and a very well informed authority on standards and norms associated with guardrails, but also for knowing just how much effort is required to manage the assembly of these silver-coloured lifesavers. And so, he promptly describes the issues he has and his company’s objectives relating to a special tool he wants EXACT to design and produce. The proposed new step drill should be able to meet the challenge to reduce the technical effort and also make it easier to install guardrails.  At the same time it should offer a real benefit to the customer through increased time saving and a reduction in costs involved in the process. Reichelt further reported that, depending on what the steel guardrail construction and anchorage points exactly look like or how the barriers might have been damaged in truck and car crashes, longer or shorter steel element parts need to be trimmed and fixed. The technical and safety standards which apply in this matter are specified in extensive detail in construction manuals. These include the prescribed connection screws conforming to the stipulated standards, as well as the required sizes of boreholes (18mm) and barrier posts (12mm) which are intended to allow the appropriate mounting operations on the guardrails. “What we hope for the future, is to manage the special assembly of the guardrails without having to constantly change tools, in order to be more efficient and to save resources,” said the 58 year old specialist commenting on key areas of concern.

Because of the high manual force needed, the past usage of large and bulky pneumatic drills in combination with normal sized twist drills (18 mm) was causing heavy wear of tools, resulting in more complex adjustment operations, regular breakage of the drill bits (4 mm) and as well as in frequent and cost-intensive damage to the drill chucks. A missing stop ring was repeatedly causing the drill to rise up at the plank pieces, which then needed to be fixed. In this way, not only the drill chuck got damaged but often the workpieces had to be machined, as well. Furthermore, the risk of injury was considered to be too high because drilling tools often have to be tilted onto drilled materials.  This was the view of the experienced site manager taken in the context of operations Germany-wide from his location in Olbernhau, Eastern Saxony.

A special step drill designed for the assembly of guardrails 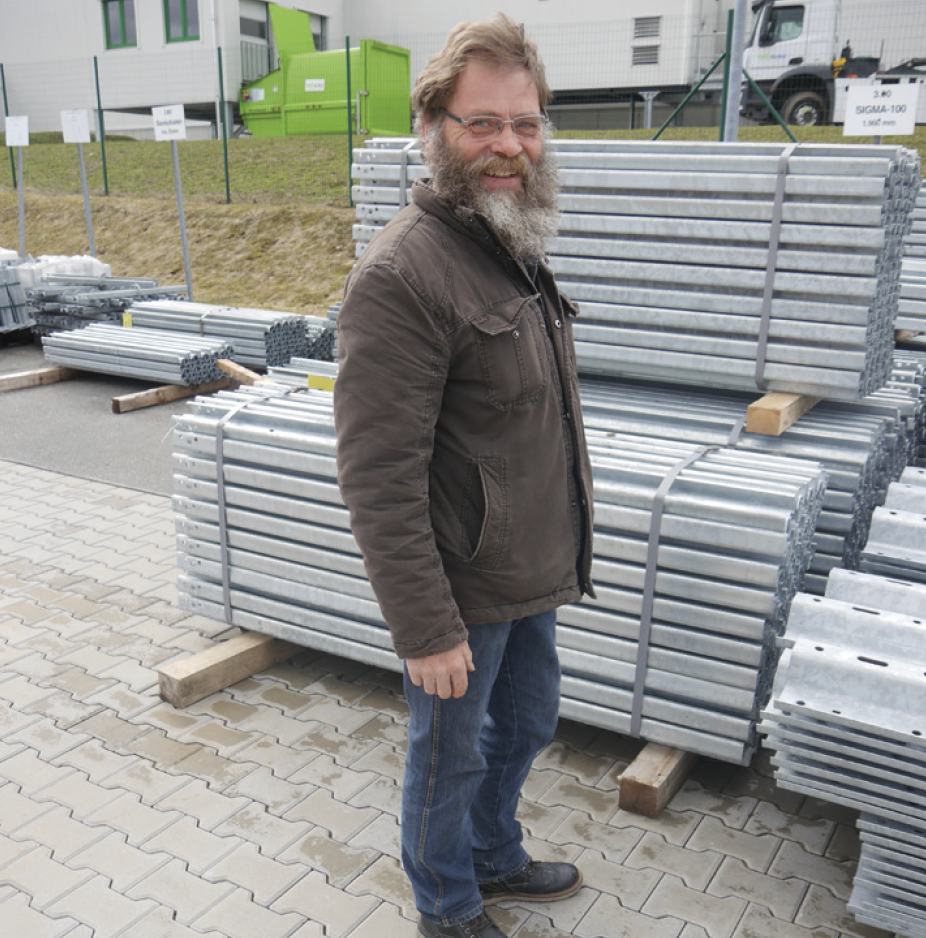 Lutz Reichelt, the representative of Erwin Peetz GmbH&Co KG, which is one of the leading companies producing steel guardrails in Germany, is satisfied with the resulting step drill product (photo taken by Jürgen Rönsch).

Immediately after the meeting, the specialists of EXACT actively started planning a project to produce a suitable custom made step drill. During the project phase, they not only intended to accommodate as best they could the requirements of the Peetz Site manager, but in addition they considered important features, such as product handling, technical safety, capacity and performance in order to develop an optimized product needing no further modification. And they managed to produce a prototype of the new special step drill only three months after the first initial meeting.  Some of the key technical parameters characterising the new “special step drill with diameters of 6 ¬ 18mm for assembling crash barriers” can be described as follows: a special cone in the cylindrical area, as well as a shaft with three surfaces, which is special designed to provide optimum transmission capacity. Those are the features, which minimize the risk on tilting of the bit during the drilling operation. The special step drill has also extended drilling step settings for the two sizes of the stepped drill bits of 12mm dia. (for assembling struts and spacers) and of 18mm dia. (for guardrail struts and box stations). Due to these extensions, the previously required tool change has now been completely eliminated and the drilling procedure can be continued without time lost. A specially designed stop ring now takes over the role of an “integrated drill chuck protection”, so any possible expensive damage is  avoided. Last but not least, variable spiral flutes ensure an optimal cut and the effort needed by the operator, is further drastically reduced. In order to operate on completely galvanized material reaching a depth of up to 3,5mm, the step drill is delivered with a specially designed TICN coating. When Reichelt is later able to hold the newly designed step drill in his hands and use it for the first time he is extremely satisfied. The product solution seems to have completely surpassed his earlier expectations. “Since we’ve been using the new step drill, our work has become faster and much more efficient. And due to the new stuck drill protection, we’ve also managed to reduce our costs”, states the specialist on guardrails later. “Besides that, in our view, safety at work has been and still is an important argument to act promptly to ensure the comprehensive use of the new special step drill all over Germany. As we no longer expect tilting of the tool during drilling, and tools are not getting jammed when pulling them out of the borehole, absences from work due to reasons such as hand or joint injuries have now become far fewer. Now the step drills are being used on cordless, and no longer on pneumatic drilling machines, so the technical benefits have been further increased. Four years after the first initial meeting in Remscheid and against this background, we can say that a completely new precision tool product has been developed, a result that is still gratifying to all participants.